It’s amazing how fast this project is going; we have completed the first 3 situations and in just over a week will begin the fourth, which is also the final situation for this funding period. Since we began preparing for the situations, we have learned a lot – about the topics we’ve been working with as well as the technologies and processes – and this learning will feed into the fourth situation. 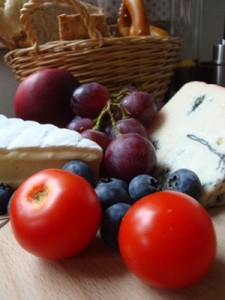 Appropriately, the topic is food, with the title “Unidentified Flying Food” referring back to previous situations addressing mobility and air travel. Food is something we all need, therefore it is hugely politically as well as cultural and emotional. The situation is located in Graz, Austria and we are researching the pressing food-related issues there, but the global context of food is ever-present. Europeans and North Americans throw away about half of our food, globally we throw away about 30%, and yet millions of people in the world are starving. Industrialised agricultural practices mean that biodiversity is decreasing, making crops more vulnerable to disease, and the increasing use of pesticides is destroying the delicate ecosystem of bees and other beneficial insects (not to mention what pesticide-soaked food is doing to humans). There are so many issues around food that it’s hard to know where to begin.

It is interesting to note that for this project we had expected that participants would want to discuss specific local issues of importance to them, but in every case the chosen “situation” has been a generic, global one. I think this is partly due to the demographics of the participants, and partly due to people’s general global awareness. It’s difficult to separate local problems from global problems, since everything is so interconnected. Local problems might be a minor irritation whereas global problems – the environment, climate change, the financial crisis and so on – are much more urgent. But, how can we solve the global problems if we don’t also address the issues on our doorstep? It’s certainly easier to look at and speak about problems from a distance, than to honestly and openly discuss what is dysfunctional in our immediate surroundings; but if we want to find long-term solutions for global problems, we need to have a solid foundation.

Industrial-scale animal farming is an issue that really is on the doorstep of many Europeans; in Eindhoven we discovered the “pig flats” – huge windowless sheds where pigs spend their entire lives in darkness, unable even to turn around in their  cramped cages. Similar pig farms exist in Austria, and in the region of Graz there are chicken farms, rearing broiler chickens also in dark, over-crowded conditions. As part of our preparation for the Graz situation, Eva recommended the documentary “We Feed the World“, which (among other things) follows the 8-week life cycle of these chickens; it’s very disturbing, I had to cover my eyes for part of it. I’ve been a vegetarian for 26 years so I am not complicit in this particular atrocity, and I challenge anyone with a heart to keep eating industrially farmed chickens after watching this.

The film ends with an interview with Nestlé CEO at the time of filming, Austrian Peter Brabeck, who makes the problematic declaration that corporations’ greatest social responsibility is to ensure that the they continue to be profitable – so that they can be around in the long term to provide jobs. He disregards as “extreme” the idea that water should be a human right, and completely dismisses Europe’s concerns about GMOs with the assertion that “not one single case of illness” has resulted from 15 years of widespread GMO consumption in the USA. I hope he has since watched the documentary “Genetic Roulette” – from the farmers’ tales of immediate improvement in their cows’ health after being taken off GM feed, to parents connecting their children’s behavioural problems and autism to GM products. But aside from this powerful anecdotal evidence, and the shocking stories of intimidation and assaults on scientists who have dared to suggest GMOs are not safe, shouldn’t the consumer always have the right to choose whether or not to consume GMOs? In the USA, absence of labelling laws means that the consumer has no choice – they simply don’t know what they’re eating. It’s this lack of knowledge – about what we are eating, where it has come from, and what other costs and consequences there are – and increasing lack of choice, that is most problematic about food.  In a very short time – only a few decades, really – this knowledge and choice has been taken away from us and we’ve been asked to hand both our trust and our money to multinational corporations that aim to control the food supply from the seed to the supermarket shelf, with only profit as their goal – not to feed the world or to improve the quality of food.

And so in a week we will regroup in Graz – travelling from Munich, Augsburg, Nantes, Eindhoven and London armed with research on the topic and insights on the process, to create the fourth situation. We have a slightly longer workshop period – an introductory session on the Friday followed by four full days of working, then the performance on the sixth day; so we have time for last minute fixes, as well as a visit to Graz’s Kunsthaus and perhaps some other local art organisations. I will be staying at kunstGarten, and I’m looking forward to meeting Irmi and Reinfrid again and enjoying their lovely garden in the small amount of time around the workshop. And of course to the opportunity to build on what we have learned over the last three situations and try out some of the ideas we have gestated in this short pause since Eindhoven.