During the second half of 2016, I will be working with staff, students and artists in Coventry, UK on the creation and presentation of the sixth “situation”. We’ll be focus on the social and community situation that has developed as the university has rapidly expanded in the town centre, dramatically altering the population demographic and the daily life experience for the people of Coventry. 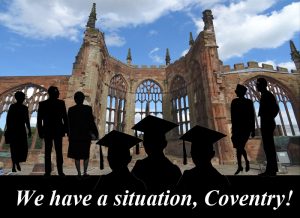 During the second half of 2016, I will be working with staff, students and artists in Coventry, UK on the creation and presentation of the sixth “situation”. We’ll be focus on the social and community situation that has developed as the university has rapidly expanded in the town centre, dramatically altering the population demographic and the daily life experience for the people of Coventry. For this project, I’ll be the Disruptive Media Learning Lab‘s first International Artist in Residence, and will collaborate with Rachelle Knowles, associate head of the School of Art and Design, who participated in the Graz situation in 2013.

Like many of the UK’s post-industrial cities, Coventry was a large manufacturing town, first producing bicycles and in the 20th century becoming a major centre of motor production. Badly bombed during the second world war, the city re-emerged to lead the way in pedestrianised shopping centres and enjoyed a post-war economic boom, largely due to the expanding motor industry – followed a couple of decades later by the inevitable economic decline. Today the university occupies more and more buildings within the city centre, literally locking out the locals and focussing on the transient student population and staff who commute in from other places.

Coventry is also known internationally as a city of peace and reconcilliation, and the university has a Centre for Trust, Peace and Social Relations. Within this centre there is a pilot project of “local ambassadors”, aimed at bringing together students and Coventry people to bridge the growing gulf between university and town. We’ll be working with the project manager, Heather Parker, as well as with other staff and local arts organisations.

This situation of increasingly divided communities is common to many small university towns – such as my own home town of Dunedin, New Zealand. Otago University is situated in the centre of the town, and has expanded significantly during my lifetime. For the first five years of my life, we lived close to the university in a mixed community – families, students, elderly people, people who worked at the university and people who didn’t. By the time I was a university student myself, most of the families had moved away and the housing around the university was almost entirely students, with a few elderly people scattered amongst them. By the late 1980s community relations had deteriorated, as students held drunken parties in the street and frequently vandalised pensioners’ fences, gardens and letterboxes. There were a number of serious incidents in 1991 when I was president of the students’ association, and in response I initiated the OUSA “House and Garden Week” – a series of competitions for categories including best student and non-student neighbours, best landlord, best tenants, best letterbox, and so on. Some wonderful stories of student-local neighbourliness emerged, the project got lots of media coverage, and students generally became more aware of the need to respect their neighbours. Fast-forward 25 years and such a project would be irrelevant, as the area is now 100% student housing, pushing local residents further out from the city centre.

Universities can give a lot to their host cities. As a young teenager in Dunedin I enjoyed the band scene that was based around the university, and the film society that showed foreign films in a lecture theatre before there were any arthouse cinemas in town. As children we were exposed to many different cultures through our parents’ university friends – for example a Russian professor, the Indian society, and the Scandinavian society. Many other resources within the university were accessible to the public and it’s still possible for anyone to enter the library and browse the books. There are not as many locked doors as I encountered at Coventry. A university should not be a closed bubble within a town – it should be a vibrant source of cultural interaction, in a relationship of mutual benefit.

My residency will begin in late October, when I’ll be in Coventry to introduce the project and will give a talk about it at the Herbert Art Gallery and Museum, 4.30pm – 5.30pm on Thursday October 27th. The workshop will take place November 17-23, and the cyberformance and discussion event will be in the evening of Thursday 24 November. You can join us online for what will be an interesting discussion!