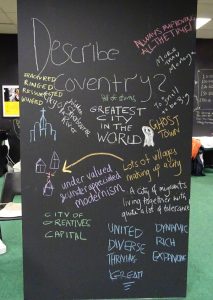 Our Coventry “situation” last week went very well and we are now in the process of gathering documentation and preparing for our conference presentation about it at In Dialogue on Friday.

After an intense week-long workshop – which included gathering research from the community via audio recordings and online contributions as well as learning about the technology and making the performance – we had a full rehearsal with an online audience on Thursday afternoon. I always aim to have a rehearsal or at least a run-through, but often the time just vanishes and the live event is the first (and last!) time that it all comes together. So I was very happy that this time we achieved it, and that we also had time to make a few tweaks and have a bit of a rest before the performance. 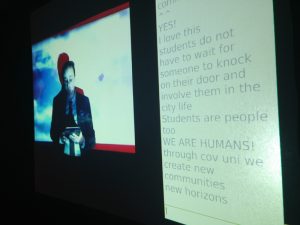 On Thursday evening about 30 people gathered in the Shop Front Theatre for the performance and discussion event. At certain times during the performance, they were invited to write on chalk boards, and the online audience contributed their responses through the chat. Creative writing students performed original poems about Coventry, with overlaid video from local resident and prolific video-maker Alan Van Wijgerden‘s archive, and the result was streamed into UpStage. Two scenes took place completely online in UpStage: in one, Lady Godiva gave an historical overview of the city, and in the other a group of wheelie bins met on the street and swapped jokes. A soundscape of Coventry music and sound effects, mixed Dom Breadmore, wove throughout the performance. 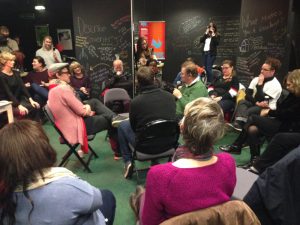 In the ensuing discussion we used the Fishbowl format, which I had learned about at another event earlier this year and was curious to see if it would work in the context of a “situation”. The answer is yes, it functioned very well and enabled almost everyone present to participate in the conversation – which continued for some two hours after the performance (and some more while we were packing up!).

Immediate feedback from the online and proximal audiences was positive – people found the performance thought-provoking and the discussion engaging. Many opinions and experiences were expressed, from housing issues to the role of the university in the community. Some concrete ideas emerged and many new connections were made. Significantly, there continue to be contributions to the online discussion, in the etherpad and also on the local social network Streetlife. The project has clearly reached a much wider public than those who were directly involved as participants and audience, and will hopefully continue to ripple out and contribute to better communication and improved community.