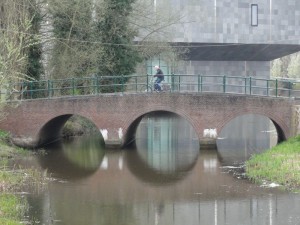 This was my first visit to Eindhoven; I discovered a compact, walkable, friendly city, much influenced by the 100+ years of Philips, the electronics giant which began here as a small lightbulb factory in 1891. Half of the city seems to have been built by Philips – even the library where our “situation” took place is located in a former Philips factory, affectionately known by the locals as “the white lady”. Architecturally, Eindhoven feels like an experimental showcase, with the futuristic bubble shopping mall “de Blob”, UFO-shaped Evoluon conference centre, quirky Van Abbe Museum and occasional dramatic skyscrapers alongside the less startling but still innovative “white lady” and other older buildings. We were staying a 5-minute walk from the library, and everywhere else we went was easily walkable – MAD, the Inkijkmuseum, eating places, TAC – which was good.

Our theme in Eindhoven was migration and mobility, moving on nicely – if a bit too quickly – from the air travel theme in Nantes the week before. Having one situation immediately after another did carry on the momentum, but also left no time for reflection between the two. We started the week with the topic still very general, and our first challenge was to work out what the actual “situation” was. On the surface, there wasn’t one: Dutch migration policy is liberal, in Eindhoven migrants are well-integrated, there is low unemployment and a high standard of living. Eindhoven takes pride in its history of technical innovation – the casette tape and CD were invented here –   and calls itself “the city of light” as well as a “smart city” and “Brainport” (although we soon discovered that this doesn’t mean there will be reliable internet connections everywhere!). Our hosts joked that it is really a “city of marketing” as it is much better at marketing its image than living up to it. This prompted us to peek under the surface, and we discovered that indeed there is more to Eindhoven than meets the eye; the real “situations” are moved or migrated, pushed out of the centre so that they can be ignored. With a little research, we discovered an unethical intensive pig farming industry, connections to human trafficking and (more generally the Netherlands rather than Eindhoven) the distant, sinister, situation of Royal Dutch Shell’s activities in the Niger Delta. We decided that our situation was this – the migration and mobility of problems so that they can be ignored or passed on to others.

The structure of the performance was loosely based on the board game Monopoly, with the players being three visitors to Eindhoven: a tourist, a refugee and a student. In the game (enthusiastically commentated by Martin Voorbij) the tourist takes all their turns first, seeing only the surface image of the city and having a great time. Then comes the refugee, who lands in a detention centre for failing to pass the immigration test. The student is more inquisitive, questioning the windowless buildings on the highway (the “pig flats”) and learning about human trafficking, before being confronted with images and facts about Shell’s destructive operations in Nigeria, and the eerie sound of the gas flares. At this point, the student’s “chance card” posed a multichoice question which was put to the audience, and this opened the discussion.
We had been having quite a lot of discussion about the discussion since the Nantes situation; audience feedback as well as our own intuition was telling us that imposing a formal discussion structure felt awkward and forced. Our intention had been to facilitate discussion across the locations, languages and cultures, but it doesn’t seem to be working so maybe we have the wrong approach. Can we find a way to “discuss” that is less verbal, and more in keeping with our artistic temperament than trying to mimic a conference discussion panel? We decided to experiment during the Eindhoven situation with something more artistic and open. After hearing responses to the multichoice question, and stories from people in Nantes and Graz about their own experiences of migration, the discussion moved into a multimedia networked improvisation between Eindhoven, Nantes and Graz. Text input from the online audience was woven into the improvisation. While not strictly a “discussion”, the improvisation felt very much like a conversation between the parties involved, with images and audio responding, arguing, reflecting and agreeing. For the performers there was a very strong connection, and the audience in Eindhoven and online were very engaged by it. We will experiment further with this in Graz, as it seems to be a better conclusion to the situations than actual discussion. Discussions work well in the local space, but it is extremely difficult to bring in multiple other online locations in a way that is natural and satisfying. When we let go of our expectations about how the discussion should be, a whole lot of other creative communication possibilities open up.

Some other learnings that I am gathering after the three situations are:

We have three weeks now before Graz, which feels very luxurious (although we have a lot of preparation to do, and everyone is also juggling multiple other projects, so it’s hardly a holiday); and in Graz the timetable will be a bit more relaxed, with an introduction session on Friday the 17th, the four-day workshop from 18-21 May, and the performance the following day on the 22nd. There is already an active email conversation about the theme, venue, technical testing and promotion. And meanwhile spring has finally sprung, so there can be some lying on the grass, digesting and reflecting on the big work that we have collaboratively achieved so far.