I am back in Munich, fighting off a cold and slowly digesting the first situation after a very intense week in London. I am tired but satisfied, energised by the people and the process, and inspired to improve on things with the next situation – in Nantes, 9-12 April.

In London we had a total 16 participants, from young digital photography students on a work placement with Furtherfield, to post-graduate students in a variety of disciplines as well as local residents and artists; and input from Bright Sparks, the local e-waste recycling initiative. Everyone fully engaged with both the theme of e-waste and the process of the project, which meant that Furtherfield’s little gallery in Finsbury Park was practically levitating with all the activity going on inside. Everybody had ideas, which in turn sparked further research, discussion and proposals of performance materials. Wrestling all of this into a performance of around 30 minutes that would act as a discussion provocation was a real challenge. 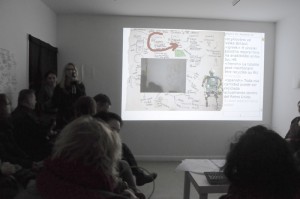 The UK Environment Agency’s statement about being part of a Global Interpol E-Waste Crime Group became the starting point for the performance, with a game of “pass the parcel” and a map of the journey or life-cycle of an MP3 player gaving us a structure for the performance. The audience in London played the game, passing the parcel when the music started, while lines and arrows indicated the journey of the MP3 player, from retailer to consumer to charity shop and so on. When the music stopped, the lucky person peeled off a layer of paper to discover a quote, which they were then invited to read aloud from within a special e-waste installation (constructed with mirrors and e-waste on loan from Bright Sparks). The quotes were drawn from a wide range of research undertaken by the participants during the week, and included factual information about the UK’s e-waste as well as quotes from economists and philosophers. Translations of the quotes were provided in UpStage.

There was a lot more going on in between the rounds of “pass the parcel” – backdrops and avatars in UpStage presented information and images relating to each quote or point of the journey, and audience members in london were interviewed about their relationship with technology and objects. Before and after the performance, they were invited to wander around the space to see the e-waste installation, a projection of images showing UK recycling centres and the e-waste site in Ghana, and the technology and people creating the performance.

The following discussion was led by Tom Keene and lasted for more than an hour, including a live stream from the gathered audience at kunstGarten Graz and input from the online audience through the text chat. It was very lively, at times even heated, with both the workshop participants and the audiences having plenty to say. It was impossible for me to keep up with the discussion, as I was multitasking like crazy between London, Graz and online. We definitely need to work on more clearly defining facilitator roles and discussion processes for the next situations – one of several things that we had thought about in our planning, but in the busyness of the workshop did not manage to give enough attention to. Facilitating an energetic discussion between people in one room can be difficult enough in itself, but our challenge is to bring together multiple dispersed voices (and languages) via different online methods (live stream and text chat) in a cohesive conversation. This is a crucial part of the whole project and we have already started working to improve it for the next situations. But even though we want to do better, feedback suggests that for most people it was still a fascinating and thought-provoking discussion.>

On the side of the technology, things generally performed very well. We realised early on that we were pushing Furtherfield’s network to its limits – the gallery is in the middle of Finsbury Park, a long way from other infrastructure, and the wet and snowy weather did not help. To mitigate this, we limited the number of computers that were online during the performance, and had nearly all of them on ethernet cable rather than wifi. We had two streams going out and six computers receiving them back in again, and all was working well – until shortly before showtime, when one stream suddenly decided to stop. We checked everything, all settings were as they should be. The streaming client was restarted, still no luck. The internet was working, the computer was restarted, still no stream. A different computer was tried and still the stream would not work.  In my long experience of cyberformance, there is always one unforeseen and sometimes inexplicable technical problem that arises at the last minute, and it’s always something that never happened before (and usually never happens again, touch wood!); for this show, it was the mysterious failure of one stream. With time rapidly running out and nothing making a difference, we had to quickly modify our plan and use the single stream that was still working without interruption. This in turn required other changes and compromises which had to be hastily discussed and agreed, as by this time the audience was already arriving and could not be left outside in the heavy snow. I was also determined that we would start on time, so as not to have the online audience waiting and perhaps leaving. As a result the start was a little bit bumpy but we soon got into it and had no further problems with the stream, the network or any of the technology.

Dispersed back to our various homes, the project partners gathered in skype and piratepad last night for a debriefing meeting. There was much discussion about the discussion, and ways to improve it. Also about refining the situation themes and developing thematic connections, so that each one builds on the last. There were many ideas about things that could have been better prepared, and suggestions to try and do things before the next situation – which begins in two weeks … as always, the main issue is a lack of time. Four days is not long for a group of people, many of whom do not know each other, to come together and create a cyberformance. For myself, one important learning is to be more strict! We don’t have to adhere religiously to the workshop outline, but certain things – such as making decisions about the material – simply have to be done in time. It’s very difficult to interrupt people who are enthusiastically researching further and further, or expanding creative ideas, but somebody has to do it and in this project, it’s me.

So now we have a brief pause, hopefully I will shake this cold, and then it’s the next two situations back to back, Nantes then Eindhoven! There are now research pages on the web site for each situation which will grow as things progress.